REDEVELOPMENT FROM INDUSTRIAL TO MIXED-USE

The Peanut Crossing project is being redeveloped by Echelon Resources, an experienced development team with a long history of success with adaptive reuse projects.  This project utilizes both federal and Virginia historic rehabilitation tax credits which require that any significant historic features be preserved and highlighted. The project plans will be reviewed in detail by both the Virginia Department of Historic Resources and the National Park Service, with regards to compliance with the U.S. Secretary of the Interior’s Standards for Rehabilitation.  Project delivery of Phase 1 is expected in Late Spring/Early Summer 2021, with many more phases following. For more information and tours, please Contact Us.

The Suffolk Peanut Company constitutes what is likely the largest and most intact historic peanut processing complex in Virginia. The Suffolk Peanut Company was the first successful peanut company in the region and many of the resources in the current complex date to within a few years of the founding of the company in 1898. The warehouses and processing buildings represent the full range of functions historically associated with the site and result in a property with a high degree of integrity and significance. The Suffolk Peanut Company is on the Virginia Landmarks Register and the National Register of Historic Places. It meets Criterion A for Industry as a rare intact peanut processing facility and representative of an industry which once dominated the economy of southeast Virginia. It meets Criterion A for Transportation with the two pronged railroad spur and long loading dock abutting the historic Norfolk & Western railroad line. Finally, it is eligible for Criterion C as an outstanding example of an intact peanut processing facility with numerous early resources with strong integrity. The period of significance runs from 1903, the date of the earliest extant resource, to 1968 when the facility was sold to Goldkist ending its link to the historically-important Suffolk Peanut Company.

John Y. King and Colonel John B. Pinner formed the Suffolk Peanut Company on January 20, 1898 with $5,000 invested by each partner and $2,000 in citizen subscriptions. Pinner, an attorney and realtor, initiated the creation of the company and was its first president. King was invited to be his partner because of King’s experience running a small peanut cleaning plant in Windsor. It was the first peanut business in Suffolk to be successful after the Farmers Alliance of Nansemond County opened the first peanut cleaning, grading, and shelling mill in 1890, which soon failed. This was the beginning of what would eventually make Suffolk the largest peanut market in the world, the “Peanut Capital.” The company initially leased an abandoned cotton mill before building their first plant in 1903 along the vital Norfolk & Western railroad tracks. King used a new approach to marketing by establishing a network of motivated salesmen to take his peanuts to outlets across the country, as well as Canada and Mexico. The company was also the first to ship a jobber car load of raw peanuts. King left the company in 1908 to form the John King Peanut Co., and was replaced by A.T. Holland. A larger mill was constructed in 1909 along with several warehouses. By 1915 the company employed 2-300 workers and 15 office staff and produced up to ten train car loads of Virginia and Spanish peanuts each day. The mill burned in September 1931 and was replaced by the current mill building which opened on March 14, 1932. As late as 1958 the Suffolk Peanut Company facility was called the best equipped single unit mill in the entire industry. It had the highest capacity and was as fireproof as was possible at the time. John Pinner died in 1938 and he was succeeded by his son.

In 1900 the Bain Peanut Company of Wakefield opened a large plant in Suffolk followed by Lummis and Company the same year. As happened later with the Suffolk Peanut Company, both of these early competitors saw fires destroy their initial facilities which had to be replaced. In 1904 the Columbian Peanut Company opened a facility in Suffolk. Other companies soon arrived including Shoop-Withers Company, Holland and Lee Company, the Tidewater Brokerage Company, the Old Reliable Peanut Company; Pond Brothers Peanut Co., and in 1913 the Planters Nut and Chocolate Company, which contributed more than any company to Suffolk’s status as the Peanut Capital. At least eight more companies related to one or more aspects of peanut production opened in Suffolk by 1939. By the middle of the twentieth century, peanuts were the leading cash crop in Suffolk and the surrounding counties.

The first commercial production of peanuts in the United States is believed to have been accomplished by Dr. Matthew Harris near Waverly, Virginia in 1844. But it was after the Civil War that the peanut soared in popularity nationally. By the late nineteenth century the “Virginia peanut” had become the most popular type in the country. To improve marketing and profit peanuts also began to be graded: in 1877 peanuts were sold as fancy, prime, ordinary, and inferior. Buyers wanted uniformity in peanut purchases. Cleaning and shelling peanuts also improved marketability. Initially much of this was done by hand, often by African American workers, but much of the process was standardized and mechanized in large facilities, like the Suffolk Peanut Company. The peanuts would arrive onsite and be stored in a warehouse before being moved to hoppers to be graded by color and size. When ready for processing they would be moved to the mill, which was often five stories for each different machine in the process. First was the stemming machine which removed what the pickers has missed. Fans removed the stems as well as light nuts, with heavier ones continuing to the next floor. The next step are cylindrical drums which tumble the nuts to polish them, with the dust being suctioned out. They are separated by size and moved to a conveyor belt in the picking room where workers removed any faulty nuts or debris missed by the earlier steps.

The late nineteenth century began to see the creation of several hundred new uses for peanuts and their various parts, including peanut butter in 1904. Other products included various candies, soap, lubricating oil, oil for other food products, cosmetics, cooking, fertilizer, paints, flour for diabetics, hog feed, and wood preservers. Eight counties in southeast Virginia produced almost all of the state’s peanut crop thanks to demand, soil, and climate. Coupled with the eight northeastern North Carolina counties, the region became known as the “Virginia-Carolina peanut belt,” and Suffolk processed much of this production. By 1881 Virginia supplied a majority of the northeast peanut market. Ironically, it was Norfolk during the latter half of the nineteenth century which was the leading producer and was known as “Peanut City.” Being near the peanut farms and being the hub for six railroad lines which stretched to all areas of the region, helped Suffolk surpass Norfolk in peanut processing and easily export its products. By 1902 ten of the twenty factories in the country devoted to “cleaning, sorting, grading, and bleaching of peanuts” were located in southeast Virginia, particularly Suffolk.

Another factor in the rise of Suffolk in the peanut industry was the production of the Benthall Peanut Picker. This was the first successful commercial peanut threshing machine. It was invented by Jesse Thomas Benthall and Finton Finley Ferguson and patented in 1905. In 1906 Benthall opened the Benthall Machine Company in Suffolk to mass produce his new machine. Suffolk had become the epicenter of nearly all aspects of the peanut industry.

The Suffolk Peanut Company facility is on the National Register of Historic Places under Criterion A for industry as the best remaining example of a peanut processing plant in southeast Virginia. It is also eligible under Criterion C for Architecture with nearly every building type associated with the processing and storage of peanuts from the early-to-mid twentieth century represented with strong integrity. The period of significance is from 1903, the earliest documented resource, to 1968 when ownership passed from the Suffolk Peanut Company to Goldkist Peanuts.

The Suffolk Peanut Company is located on a large wedge-shaped ten-acre site on South Saratoga Street in Suffolk, Virginia. The large peanut processing complex consists of numerous warehouses and several processing buildings spread out across the site with many concentrated along the north end bordering the former Norfolk & Western Railroad line. The early twentieth century buildings, which make up a majority of the resources, are brick masonry Commercial Style with some limited articulation. The site is flat with grass and gravel between resources and surrounded by a high chain link fence. There is a small stand of trees on the eastern end of the property. The surrounding area is a mostly light industrial with no sidewalks. With the intact railroad to the north, an intact spur on the property, numerous contributing resources with strong integrity, the overall setting of the property is one that retains much of the historic character and materials. 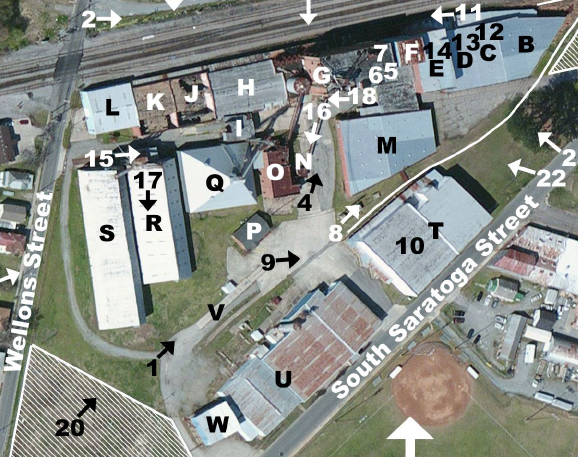 The former Suffolk Peanut Company complex on South Saratoga Street, bordered by the Norfolk Southern railroad line to the north, Wellons Street to the west, and South Saratoga Street to the south, is located on a ten-acre wedge shaped parcel.  The property retains numerous warehouses, buildings, and large scale equipment used at one time or another in the peanut processing and storage industry from the beginning of the twentieth century until the sale of the company to Goldkist around 1968. The older buildings on the site are lined up parallel to the railroad line in a narrow band, and represent the original company parcel until it was expanded to encompass the current site in 1917. Two groups of warehouses date to the early period of development of the Suffolk Peanut Company. Warehouses 2, 3, 4, 5 were built along with the original ca 1902 mill (demolished in the last decade). Another mill was constructed ca 1914 and ca 1920 warehouses 10, 11 were added soon after. Later the 1928 Central Warehouse was constructed as the business expanded and this may also date the addition of the expanded railroad sput into the center of the site. The second mill was destroyed in a fire and replaced by the current five-story 1932 mill on the same site. An expansion of the complex accompanied the construction of the new mill in 1932 including the cold storage warehouse ca 1932, a boiler house and power plant ca 1937, and an expansion to the mill added by 1949. As peanut storage became an increased focus of the business, the cold storage warehouse was expanded ca 1950 and three large metal warehouses were built between 1963 and 1972. Finally, the grading warehouse was rebuilt and expanded ca 1976 and followed by a new office, truck scales, and a sampling station in the 1980s completing the current complex. The currently existing resources are as follows, and labelled to match the accompanying map.

The historic Golden Peanut factory site is being renovated into mixed-use town center complex, including market-rate rental housing  – one- and two- bedroom “loft-style” residences – known as Peanut Crossing.  The parking and grounds will be revamped as part of this project. The historic features will be preserved and highlighted as this project utilizes federal and state historic rehabilitation tax credits, so the redevelopment design is overseen by both the Virginia Department of Historic Resources and the federal National Park Service.

Peanut Crossing IS THE EXCITING, HISTORIC HOME WITH LOTS OF AMENITIES THAT YOU HAVE BEEN LOOKING FOR.